In this business/management simulation, you play a virtual mayor of a city that is about to be built. You start with a certain amount of money which you have to invest and build residental, commercial and industrial zones, power plants, airports, docks, parks, railroads and such. Every building requires both water and electricity as well as road access. As your city grows you will be getting more and more money to invest in city expansion, more industrial zones... Sim City is a legend that started a new genre in computer gaming. Do I even have to say that?

This was the one that started off Maxis's great line of Sim games. This one was of course, by far the most popular one too! OK, so the game is a bit out dated by today's standards, and compared to its sequels, it's barely got any options... But in its day it was a very complex game! Especially for the year it was made.

To have a living, breathing, fully functioning city running on 512 KB memory? Well, that's exactly what this game did. In the game you can either choose to do a pre-defined scenario, and try to complete the scenario objectives, or you can try your hand at making your very own city from scratch.

The game requires you to think about various aspects of city planning, such as roads, rail, airport, seaports, which types of housing, etc. But of course, none of this can work without a power plant and power lines running throughout. This can prove very annoying, especially if your whole city is running from a central power plant, and a single link gets severed somewhere down the line, and you have to either try and find that broken link, or build a whole new set of power lines.

The game allows hundreds of different combinations of things for people to try, such as building several small villages across the map, all linked together, or building one huge city, which can get harder, as traffic gets denser, and property value decreases. Remember, when you see cars it doesn't mean that people are moving in and driving cars, it simply means that the roads are congested.

I could keep on going on about all of the different things to do in this game, but I feel that you should explore the game yourself. So download it!

The first one of the long time Sim- series. Followed by Sim Earh, Sim Tower, Sim Life etc. Sim City 2000 was the biggest hit. In this first episode the graphics was very poor. Quite simple town building game. Runs well from Workbench. 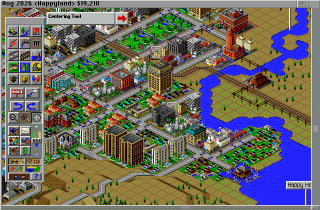