"The Perils of Rosella". Princess Rosella has just been rescued from the gigantic three headed dragon by her long lost brother Prince Alexander. All of a sudden, King Graham is stricken by a terrible heart attack. "There is something you can do." sounds a voice from the magic mirror. Rosella agrees to trasport her by the mirror to the land of Tamir... thats where the new quest starts... 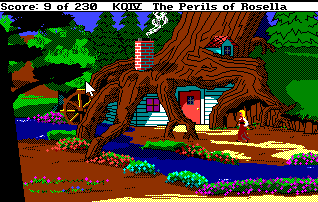