This episode is called: "To Heir is Human" Two years after the marriage of King Graham and Queen Valanice they bore a twin--Prince Alexander and Princess Rosella. Everything was fine until one day when the evil wizard Manannan kidnapped Prince Alexander.

The game starts when Prince Alexander approach to 18 and decide to work towards an escape. 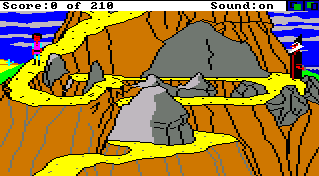