This episode is called "Quest for the Crown". The very first episode of the game was released in 1986 with 16 color graphics. Unfortunately I was unable to launch it, so I put you online the Remake version from 1990, which featrues better sound and graphics. The whole King's Quest story about the kingdom Daventry and the childless King Edward starts here... 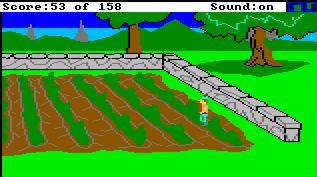