Conversion of the arcade game. Also know as "Ikari", this game is a vertical scrolling action shooter, very similar to Commando (also from Elite). One or two player has to fight their way through the jungle, rivers and eliminate the enemy. You can find different weapons such as machine guns, grenades, and rocket launchers. 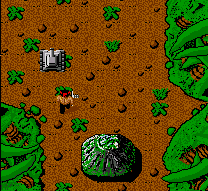