A very nice adventure game with platform elements. Cosmic is a guy from planet Linoleum. There is a legend about a planet called "Earth", but nobody seen it and nobody belives that it's really exist. So Cosmic wants to travel to Earth and bring photos from there to prove that it's not only a fairy tale. You have to get through many adventures, travel in space with your spaceship, strike down a robot revolution and so on. 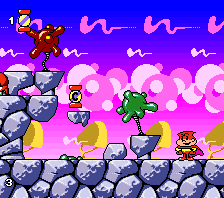