Oh, just another beatīem up game? Not exactly. In this game you have to create your character/fighter first in several arcade sequences!

This is what makes this game unique. There are six different sequences you have to play in order to create a new character, they are called "the chambers of shaolin" (historically there were 35 and you had to master each of them in order to get the highest grade in shaolin kung fu). These sequences vary greatly in what you have to do, for example there is the classic smashing of bricks where you have to maul your poor joystick like you did in the era of Decathlon and ...-Games. But there are also very unique ones like the chamber in the mill. You have to kick a sandbag hanging very high. When it starts swinging you try to hit two bulkheads with it, and you better hurry cause water is pouring in! You can even be knocked over by the sandbag and lose time if you miss it!

After you passed all chambers, a character will be generated with stats matching your results. For example, if you managed to smash many bricks you will have great strength. These stats do determine how much damage your character does, how long his healthbar will be, how fast his health regenerates, how fast he will move and even which moves he will be able to use!

Now to the actual combat. The players can choose from all characters saved to your character disk. The fighting requires a lot of timing and knowledge of the various moves, especially their range. Everything reduces to this because there arenīt any "special moves" you may be used to from games like Tekken. Battles can be quick over or long, drawn-out battles, depending on the characters and used tactics.

Graphics are really good and sound is acceptable. Fans of martial arts movies may recognize some samples, especially old ones from Jacki Chan.

This game isnīt recommended for pure fighting but the nice twist to create characters and put them against each other is truly fun for a while.

Tips on gaming: Creating a strong character is obviously very important and you can nothing but train for this. While fighting try to use moves that knock your opponent over while you are behind - you can use the time he stands up for recovering health. 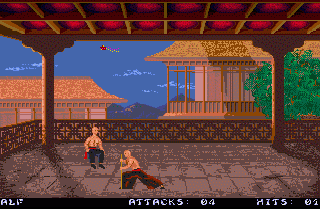 People who downloaded this game have also downloaded:
Defender of the Crown, Barbarian, North & South, Budokan: The Martial Spirit, Emanuelle