It's an isometric action adventure from Bitmap Brothers / Image Works. You play a thief called Karadoc. You heard a legend, that the castle Wulf is filled with treasure. What legend didn't say: It's also filled with deadly traps, riddles and monsters. The isometric view makes the game similar to the Heimdall series. 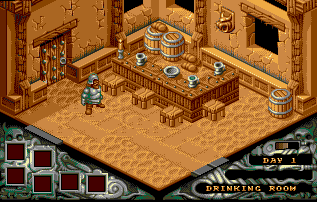