A lot of people consider Buggy Boy (or Speed Buggy as it's known in the US) a rather influental game. It is considered to be the first true racing game with a good feel for speed. Others have tried before but all have failed.

Buggy boy is a third person perspective racing game, using sprite graphics. The scenery dashes past you as you race along, avoiding boulders, trees and alike which cause your buggy to tumble or just slow you down. As in Outrun, you must pass checkpoints within a certain time or the race is over. Of the five tracks, four are a series of checkpoints with a start and a finish, while one (Off Road) is a circuit where you can complete lap after lap. The tracks have many different coloured flags that you can drive through for point bonuses, or extra time. There are also smaller flags that start to flash under certain conditions, presumably giving you extra bonus points.

This is one "small" yet enjoyable game. 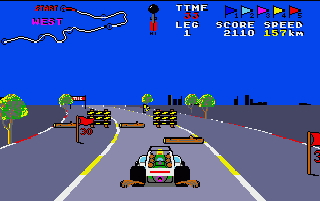