Black Crypt is a first-person perspective 3D dungeon exploration game similar to the "Dungeon Master" and "Eye of the Beholder" series. You play the leader of a group with three other characters, whose goal is to locate Estoroth Paingiver, a powerful cleric, and seal him within another dimension. Although banished twenty-two years ago in his Black Crypt dungeon, Estoroth has been gaining strength since then, threatening the country of Astera again.

The game consists of 28 dungeon levels. Some levels are small, while others are about 900 square areas in size. The party of characters move through the dungeon one game square at at time, in one of four directions, causing a first-person 3D view of the dungeon passages to be updated. Battles with monsters and manipulation of dungeon objects all occur within the dungeon view. Although the dungeon environments are less varied than those in "Dungeon Master II", they are quite well drawn. The underwater levels were an interesting idea, presenting a challenge to exploration.

Various monster minions roam the dungeon. Some only inflict physical damage, while others can poison or disease characters. One level contained some creatures that were not aggressive, which was a refreshing discovery! Most monsters were easier to handle than those in the "Dungeon Master II" game, but since I preferred to map the game area rather than do battle, I was not disappointed.

Food and water are important for maintaining health, and must be found when characters become hungry or thirsty. Otherwise, characters will eventually die. Since I like to spend time mapping dungeon exploration games, I found this requirement too awkward at the beginning. Pausing the game removes the dungeon view, which is not desirable when trying to draw a map. Eventually, I "cheated" by locating and editing the food/water levels in the saved game file.

Magic spells are also useful during your quest. They are learned by finding spell books, but some spells require a minimum experience level before use. The spell-casting interface is easier to use than the one in the "Dungeon Master" series. Each character capable of casting a spell can "memorize" up to five complete spells, which is useful in battle against certain strong monsters.

Some puzzles in the game were a challenge. Secret floor switches may cause walls or pillars to move somewhere, the only indication being a grating sound. The movement of some obstructions may also be delayed and/or sequenced. A few puzzles require information found in the user manual, which serves as a type of game copy-protection.

Black Crypt will be enjoyed by those who prefer basic dungeon exploration games, like the original "Dungeon Master" game. 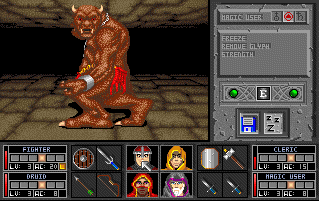