Bard's Tale is a basic "dungeon hack". You create a party of 6 characters, who can be mages, warriors, rouges, wizards, etc. You then wander down dungeons filled with monsters, defeating them in turn-based text-style combat.

The Bard's Tale was a classic in its time, but has long since been forgotten by most gamers except those who played it in the mid 80s. The Bard's Tale was the next step forward after Wizardry I, and took the genre of 1st person RPG's to new heights. Bard's Tale had greater detail, colours, and even moving pictures of the enemies (those who remember playing Wizardry I in monochrome will appreciate what a step forward that was). Bard's Tale also added non-pure dungeon hack elements, with more puzzles, a town to explore and a number of dungeons instead of just one. An additional two Bard's Tale games were written after the first one's success. But after that, the game company with control over the name sat on the rights, and so the series passed out of memory.

But that is the history of the game, you may well ask why play Bard's Tale now? Although the game was a leap forward in its time, everything it does has been done better. Yet, I find that Bard's Tale strikes a rare balance between variety and simplicity. There are enough options to make strategy in planning your attack important in Bard's Tale, but not so many that the game becomes incomprehensible. Furthermore, the game is a solid 1st person RPG. The dungeons are well designed, the creatures and the characters are well matched, and the system is easy to use.

It should however be warned that we all must have had a lot more patience in the mid 80s, because this game takes a LOT of time. There are lots of dungeons, with lots of levels, and it is always essential to build up your characters' levels, which can take a while. Additionally you MUST map almost all of the dungeons if you want to make sure you've cleared them out and ensure you don't get lost. This latter requirement was mostly removed from the latter games, but I do remember many nights sitting up by the computer with grid paper and pencil, happily mapping the game into the wee hours of the morning. Looking back on it now I conclude I must have been mad, but then, everyone else was enthralled in the game too, and so if you suddenly find you're hooked on this game, you can take comfort in knowing that there were many others. 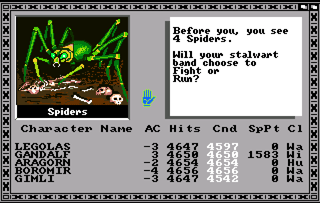