ThinkTank is an excellent "outliner" application, a niche genre of applications that were more popular on the Macintosh in the early 1980s. Outliner software allows you to organize your ideas into a complex hierarchy and edit them - to create a detailed outline, in other words. Naturally, outliners were popular among professions that require a lot of idea organization and presentation, including lawyers, engineers, students, and executives. The genre inexplicably died out sometime in the mid-1980s, although its functionality lives on in most modern word processors (e.g. the "outline view" in Microsoft Word).

ThinkTank is one of the better outliner programs, and one of a handful that were released for the PC. The program has a command-line interface similar to Lotus 1-2-3, and is entirely character-based. Thanks to Symantec, you can now try out one of the lesser-known applications free of charge. 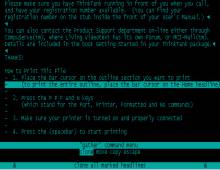