Water Wonder is a unique computerized board game based on the actual board game of the same name. Designed primarily to teach kids about different states of water (steam, liquid, and ice) and how different objects affect them, the game is easy to learn but becomes repetitive after the novelty wears off. Your goal is to reach the end of the board within a given number of moves in "shallow" (i.e. easy) mode, and collect more clams than your opponents in "deep" mode.

At the start of each turn, you choose what state of water you want to be, then click on "spin" (i.e. roll the die) and choose the number of moves. Steam travels further than ice, and so on. The fun starts when your playing piece (ice, liquid, or steam) encounters specific object on the destination tile and interacts with it. When ice lands on a tile with a heater, for example, it will melt and become liquid water. Some objects don't change the water state, but helps you move to a farther place - the well for example will scoop your piece into a bucket, then lets it go one level down. Up to 4 players can compete in the game, taking turns after each other.

Although Water Wonder is definitely original and unique, it doesn't have enough complexity or variety to sustain interest for long. Kids who finish one game will know what each object does after traversing the whole board, and will have no reason to start another. At the end of the day, this is just another board game conversion that didn't take advantage of the PC's capabilities very well, and so gives no reason for fans of the board game to play it on the computer instead. Too bad. 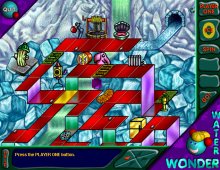