"So you want to be a rock and roll star?" sang the Byrds, "Then listen now to what I say: Just get an electric guitar and take some time and learn how to play..." (writing credits and copyright whatnot go to by R.McGuinn and C.Hillman I think... no copyright infringement on this site). This is a message taken to heart by the writer of this little shareware game, where you play an aspiring chart-topper over the course of a several-year career, progressing from an untalented no-hoper living on the streets to a platinum-selling, stadium-packing megastar. Talent is "earned" in this game by practice and time, but as we all know, talent means nothing if nobody knows your name and so the RPG levelling up is based not on your actual talent, but on your fame rating and the number of "FANatics" you have attracted to your cause. These are presumably the people who come to your gigs and buy your albums, though with the rather limited interface it's a bit hard to really connect to your fanbase.

I say the game has a limited interface, but it's adequate to the task of sitting around in your flat or house or in a bar or being at a gig, everything is in its place and for a game which I'm pretty sure was written by a non-native English-speaker, it's pretty well-written and apart from the occasional ambiguity, it's all easy to understand.

Superstar is a well written, well thought out game which pretty much reflects the whole process of putting together a pop career, you can tackle everything yourself and die from the stress - you can die from stress in this game, you can also die from staying awake for three days solid practicing; sure, it could do with a better warning system, but if you're in the habit of making your aspiring star stay up for sixty-hour jamming sessions, you soon learn to remember to watch your exhaustion-meter - or you can put together a band and get a manager and put everyone's talents to best use and live with the consequences of relying on other people to work for you.

In this game, you'll be gigging in clubs, writing songs, touring, performing on albums and in videos and dealing with stress and depression in whatever way you can, the game gives you plenty of options, from drugs, to drink to communing with nature. All the methods have their advantages and disadvantages but there are currently some balancing issues there such as the fact that you can sit in a bar drinking vodka shots for as long as the money holds out and (A) not die, (B) not have your internal organs rupture from the gallons of vodka you drink and (C) not have it affect your driving.

It's the balance issues that are currently preventing me from really recommending this game because it's literally not in a completely finished state at the moment. It's very close and it's mainly only balancing and maths errors that crop up when you start to pay attention. I had some issues with certain things not being right after I loaded games for example.

I say "had" because the PC games industry works in a very similar way to the "FANatic" level system in the game; knowing this, one e-mail and a couple of free hours on the designer's part, and I was kindly given a link to a freshly patched version of the game. If he can keep up that standard of response to bug reports, the game should be in a complete and finished state within a couple of days of dedicated playtime by enthusiastic wannabe-Superstars like myself.

So, while I can't say to you that this is a finished game, I can tell you it's a good game, it's a satisfying game, it's also a pleasingly long game which you won't be finished with in a couple of hours and, if there's any sort of response at all to this review, it will be a finished game soon and I'll be able to amend this review. So if you think you've got what it takes to make a rocker out of yourself, give this a whirl and you won't be disappointed and you'll also be helping an aspiring programmer out on what is a very detailed, well-crafted and above-all fun game. 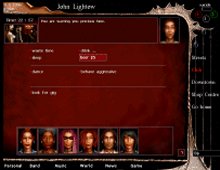 People who downloaded this game have also downloaded:
Sea Legends, TV Mogul (a.k.a. Prime Time), To Serve and To Protect, Settlers, The (a.k.a. Serf City: Life is Feudal), Dopewars