Rather unusual for the year 1994, the game is refreshing blend of fantasy and strategy, definetely a grandmother of many newer games of its kind. You play role of demi-god defending his kingdom and the choices are innumerable. Anything from creating your own magics, breeding new monsters and even personal combat and interrogation of caught enemies, tinkering you own diabolic traps, the game beats Dungeon Keeper titles in everything besides graphics, provding players with more flexability. One of my favorite choices indeed.

One of those true classics that broke the mould and proved to be a building block in the creation of other clones. Dominus gives you control over a small kingdom just before hoardes of lethal creatures begin to invade looking to pillage all your resources. your kingdom consists of acres of land, ranging from your castle, through stages of populated areas, down to wilderness, all packed full of tasty looking resources.

Under your control are your four generals and their armies of your own diverse and just as lethal creatures. you can choose to command your generals to perform various tasks or take direct control of any of the tasks possible. for example, one of the biggest features of Dominus is the ability to make a myriad of diffrent traps, you can either assign one army to spend time creating traps for you while you go about other tasks or you can make the blueprints yourself, linking a trigger with an effect (one of my all time favorites is the Chest-Thing trap).

Magic is also available and can be used to do all sorts of unfriendly things to your enemies, you begin equipped with a vast spell list and a few components to mix them. spells range from Disintegrate to Polymorph and all have a different use: Net, for example, can be used to snare enemies and allow you to drag them back to your dungeon where they can be interrogated and put to use in your own armies, you could then use the spell polymorph on them and turn them into various diffrent creatures, my favourite is the draconians who can be Polymorphed into fierce fire breathing dragons.

Creatures can be used for very specific purposes and fight well against certain types of enemy, most combinations are fairly obvious such as Water Elementals being stronger against Fire enemies. When you have a large selection of creatures, up to six can be magically merged to form a large hero creature, and their are numerous combinations and effects, i'm pretty sure I haven't seen them all but I keep trying.

I commonly refer to this game as the original Dungeon Keeper, only packed with many more types of monsters and slightly more pixelated graphics. This game has definitely found it's way into my favorite list, and it is still replayable to this day. 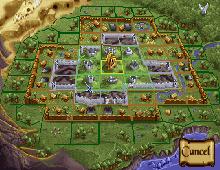