Discovery: In The Steps of Columbus

Veteran wargamer M. Evan Brooks said it all in his synopsis of the game: "The 500th Anniversary of Columbus was PIC (politically incorrect). The movies, televisions, books quickly became major "busts". This game was no different -- slow, dull, user unfriendly. If this showed Columbus in a positive light, it is a wonder he ever secured the wherewithal to head an expedition."

Enough (dis)recommendation, methinks. Too bad the engine used in Merchant Colony was only marginally improved for this utterly boring game. Go play Sid Meier's Colonization for Windows instead if you're a fan of the period. 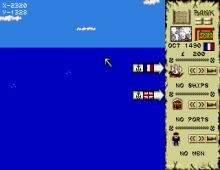 Discovery: In The Steps of Columbus screenshot