Beehive Solitaire is a solid PC implementation of an original solitaire game by NZP. From the official blurb: "This good and little-known solitaire is easy to play, and can be won reasonably often. But it's not unusual for a game to get blocked just when you least expect it! In this solitaire, the cards represent "bees". The object is to combine all 52 cards in sets of 4 (such as four Queens, four Kings, etc.). The cards can only be combined within the "flower garden"; an area comprised of 6 foundation cards." The game is perhaps a bit too easy - solitaire experts will lose interest after winning a few games and return to the likes of Good Neighbors Solitaire instead. However, this doesn't mean Beehive Solitaire is not a good game: it actually is a good introductory-level solitaire game for beginners, as well as solitaire fans who are always on the lookout for new, original rules (like yours truly). Recommended, although don't expect much of a challenge. 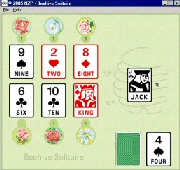