In September 1983, the whole of Australia was in a state of jubilation after Australia II ended the New York Yacht Club's 132-year domination of the America's Cup. This was clearly the inspiration for this little yacht-racing simulator, in which you are urged to win the cup for Australia by beating Liberty. Australia II was owned by businessman Alan Bond's syndicate, and at the time Bond was seen as a national hero. Seven years later though he was being released from jail for defrauding shareholders of $AU1.2 billion.

But this is a yachting simulation, not a financial simulation, so you'll need to know how to steer a real yacht. The rudder, mainsail, jib and spinnaker positions, and the tightness and tension angle of the sails are all under your direct control and depicted in simple but effective black-and-white vector diagrams. The game comes with detailed instructions on how to control your boat and on techniques such as tacking. You will of course need to avoid collisions, as well as pay attention to the changing wind conditions and the yachts' wind shadows. While it's hard to fault Yacht Racing Simulator on its realism, it's really only suited to yachting enthusiasts. But if you do win the race, don't expect to receive - as Australians did courtesy of Prime Minister Bob Hawke - a national holiday. 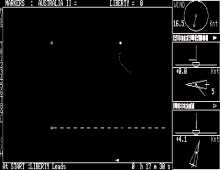