Probably the rarest PC game from SEGA, World Championship Soccer is an okay PC port of one of the first soccer games on the SEGA Genesis. This overhead soccer game lets you choose from 24 national teams to compete in the 1990 World Cup tournament. Other than featuring real-life team and player names, there is not much to recommend this simplistic title. You can only control the player closest to the ball, and the game lacks many important rules such as fouls and offsides. Worse, throw-ins, corners, and goal kicks are all cumbersome to set up, slow to execute, and mostly inaccurate. The game is also quite difficult - I suspect this is because it places unfair bias toward computer-controlled teams, because their players never seem to miss any goal opportunities no matter how much better my players' stats are compared to theirs (unless I play against the USA team, that is). Decent graphics and good two-player exhibition mode (hotseat on the same computer) cannot rescue the flaws of this game that deserves its obscure status. Not recommended. 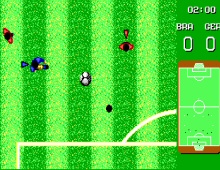