On The Ball: League Edition (a.k.a. Anstoﬂ)

One of the most underrated soccer simulations ever, On The Ball differentiates itself from the likes of Championship Manager by its novel emphasis on the psychological aspects of the game. The game gives you, as team manager, full control over not just the strategies but even on what kind of "pep talk" you can give during half-time and PR moves to enhance public perception. Choose the host country, and lead your team from Qualification to World Cup in World Cup Edition and lead your English team to win the championship in League Edition. 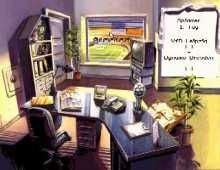 On The Ball: League Edition (a.k.a. Anstoﬂ) screenshot