Outside Germany, the Anstoß (a.k.a. On the Ball) series is rather unknown. Which is a shame, because this is easily the best series of football (or for US residents: soccer) management series ever made, with the third part (which unfortunately was not released other than in German) beating the famed Championship Manager series in depth, detail, and realism.

Anstoß 2 was a great sequel to the classic Anstoß 1. In it you can play a career as a soccer coach. Sounds simple? Well, you can alter the settings - you can start in the 3rd league, struggling to gain status via successes and wins to become the next Ottmar Hitzfeld or Alex Ferguson. Or you pick your favourite club and manage it. Or you play for as long as you like, hundreds of years.

Unfortunately, the game does not feature an official license, so all players and clubs are a bit mocked up. However, an editor makes up for it. Devoted fans have put up files for download with the original names, badges, and clubs.

In the game itself you are in full control of near all aspects of the club. You buy and sell your players, make the line up, devise the tactics, expand your stadium, conduct the training and do pretty much anything a real coach/manager does. This can be pretty overwhelming at first, as there's a dazzling array of options. However, you can have some of the more tedious tasks done by a co-trainer which you have to hire, like scheduling the weekly training, or which player to focus on in training, or for making suggestions for the line up.

You can automate the trade with merchandising articles, and pay an agency to pick the best sponsor contracts. Your players feature a number of stats in various fields, plus they have special traits, like natural leader, or allrounder which all work for (or against) your success. Looking closely at the development of your players is important, as there are many actors influencing how well they perform on the pitch - have they scored recently? Are they happy with their contract (which you can elaborately negotiate)? How is their exhaustion?

During the matches, you get pre-rendered 3D scenes of what's going on on the field. Personally, I prefer the radio-style text mode of Anstoß 1 and 3 which is missing in Anstoß 2. You can make the usual substitutes, changes in tactics, which should reflect the abilities of your team and players - if you have forwards who make good headers, and midfielders who are able to shoot good high balls, you should set your tactics accordingly. Most of the time you will get fairly reasonable results. But even the best team can have a streak of bad luck where it's beaten by supposedly weaker ones, just as in real life. And if such a streak lasts too long your club can fire you, and you will have to go find a new club. Giving the wrong answers in a post-game interview can quicken that pace.

To include all the detail of Anstoß 2 (and its add-on Anstoß Gold, which adds the chance to become coach of national teams aside from managing your club) is near impossible. What adds to the fun of the game is that it doesn't take itself too seriously. You have rather cute graphics which sometimes become too much in the menus. Every April 1st, you receive an extremely vicious event - like your whole team dies in a plane crash - that often enough makes your heart miss a beat, which turns out to be an April Fool's prank. You can dope your players, have a black account for money to bribe referees, or teams. You can order your players to deliberately play foul on an opponent. You can give directions to delay the game in certain instances, like when you are leading and there's only few minutes left to play.

Basically, what is in the world of soccer is in Antsoß 2 and its add on, Anstoß Gold, and as I said, mentioning all details and all game play mechanics would require to write a book. Its incredible detail, immense replayability, and its "non-dryness" that draws you into it make it a great game that stands out tall from the crowd of soccer management games. 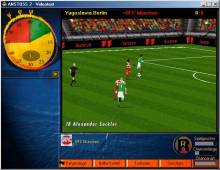