NCAA: Road to The Final Four 1

NCAA: Road to The Final Four games are among the first sports games to feature digitized players and sounds. Although gameplay is heavily arcade-oriented and the camera angles sometimes block crucial views, the games do offer some coaching options and primitive tactical options. Gamers who love details should steer clear of this duo, but they provide lots of fun for everyone else :) 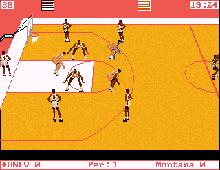