This is a rare PC version including two excellent football (soccer to you Americans ;)) games for the Spectrum: Michel Futbol Master and Super Skills, both of which are sadly very little known outside Spain although they were marketed in several languages in Europe. Super Skills is a rare football training program that teaches 5 basic concepts of the game, from controlling the ball to passing and penalty kicks. Michel Futbol Master simulates the 1988 European Cup, including eight contestants: Italy, Denmark, Germany, Spain, USSR, Holland, England, and Ireland.

What makes both games stand out is the excellent graphics and even digitized sound effects (a rarity for a 1988 game). True to Dinamic's illustrious pedigree of games that are visually excellent, both games sport outstanding graphics that push the 4 colors of a CGA palette to the limit. The games are both arcade-oriented, so it's the real action that matters. You control players from a top-down perspective, with either joystick or keyboard (the keys of which can be redefined). The digitized speech is excellent, and the games play very smoothly with reasonably realistic ball physics. Overall, definitely two of the most negleced pioneers in the genre that deserve a much closer look by fans of the sport. 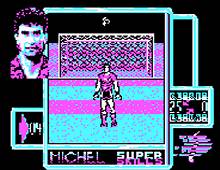