This is a beta version of KartRace, a fun kart racing game that was released only in Korea. The game is identical to the release version in every way except the beta notice.

The game is best described as the Korean version of Virgin's fun SuperKarts game. It is similar in many ways: cartoon-style graphics, split-screen two player mode, and a lot of colorful tracks to race in. It is not innovative in any way, but that does not mean it is a bad game. If you have played SuperKarts and want more of the same, KartRace will provide more hours of enjoyment than you might expect. The animations are smooth, the anime characters pleasant to watch, and the action always hectic with plenty of aggressive computer drivers. Recommended. 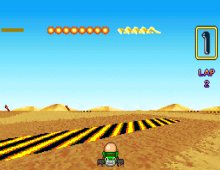