Jaws is an ambitious shark hunting simulation based on the Steven Spielburg blockbuster movie of the same name. In contrast to most fishing games, the goal in Jaws is very narrow: hunt for big sharks to earn money, so that you can better equipment to-- hunt for more sharks in more dangerous waters. You start out with a boat and $8,000 in cash, which dwindles very quickly as you buy modern shark-hunting equipment. You can choose from a wide range of locations to sail to, be it the Atlantic or Pacific Ocean, Kingston or Acapulco. The hunting itself is a bit boring-- a little bit like fishing in fact. I would think shark hunting would be more exciting and suspenseful, like in the movie, but unfortunately the game's dull CGA palette and awkware interface doesn't convey that too well. The game does have some nice touches though, such as the different weapons and boats you can ugprade as you make money from selling sharks. A "weapon school" in every port is where you can get certified for each weapon -- this improves your accuracy with that weapon.

Overall, Jaws despite the name is a somewhat dry, repetitive shark hunting simulation. Not a waste of a blockbuster license, but Box Office didn't exactly take advantage of it, either. Worth a look only for die-hard fishing and/or shark hunting fans who want a narrowly-focused fishing game with a unique angle. 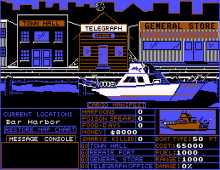