Probably the most obscure game ever made by quirky French developer Coktel Vision (Gobliiins, Lost in Time). E.S.S. Mega (a.k.a. European Space Simulator Mega) is a lackluster space shuttle simulation that tries hard to strike a balance between realism and playability, but doesn't quite succeed.

To be sure, the game has a lot going for it. There is a lot of eye-catching 3D-modelled graphics that makes Virgin's venerable Shuttle look like a kindergarten coloring book. There's a wealth of information in the in-game space database, and quite a lot of gameplay depth. In contrast to the mission-based structure of Shuttle), E.S.S. Mega is one long campaign that is similar to Buzz Aldrin's Race into Space, but with emphasis on micro-level decisions (e.g. how much fuel to carry) then macro-level space program policies. You will first equip the space shuttle with cargo, crew, and energy. Then you will launch, pilot, and land it on a "shuttle carrier." When your shuttle is safely orbiting Earth, you will send up and maintain satellites, build and manage a space station. All in a day's work.

Although the separate parts of the game are well thought out, the game as a whole comes across as a repetitive, "dry" simulation that won't hold anyone's interest for long. The game is quite linear in a sense that once you try out every option, there's no leeway to try a different approach. There is only one (or at most, a few) combinations of cargo, crew, energy, and other options that will succeed, and lack of random elements that make Buzz Aldrin challenging. Overall, worth a look for space buffs, but only for historical interest as one of the rarest space simulations. 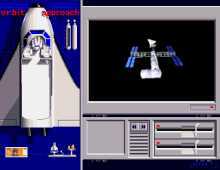