One of the very few business simulations released for the Super Nintendo (the version for SEGA Genesis was also made), Aerobiz Supersonic from KOEI is a fun airline management game that is not as complex (in terms of the economic model) as Airlines, but is still quite challenging and realistic. The game is an improved version of Aerobiz, based on the same engine, but adds better graphics, more planes, and more scenarios you can play, including two hypothetical scenarios, one of which is a fun stipulation of supersonic travel in the 21st century.

As CEO of a budding airline, your job is to grow the business into every region of the world, and become the market leader in 4 of those regions within 20 years. Although you start the game with a large sum of money, you will quickly run down because initial investments (buying new planes, etc.) are very expensive. KOEI is famous for challenging-yet-accessible simulations, and Aerobiz Supersonic is no exception. In addition to making day-to-day business decisions such as planning routes and spending money on advertising, you also have to keep a close eye on world events and how they affect your business. For example, in one scenario that spans the Cold War, U.S. carriers cannot buy planes made in Russia, nor can Russian carriers buy U.S. planes. Similar to Railroad Tycoon II, you can buy businesses that complement the airline business, such as hotels and bus services. It's details like this that makes Aerobiz Supersonic a lot of fun, and quite replayable because each of the four scenarios has unique events, planes, and companies. The user interface is very easy to learn and use (it would have to be, given the limited number of buttons on the SNES gamepad), and the graphics are pleasant.

Overall, if you enjoy business simulations, Aerobiz Supersonic will keep you entertained for hours. If you think console games are all simple because of hardware limitations, Aerobiz Supersonic will help change that perception. There is a greater range of planes in the game than in most similar PC titles (such as Air Bucks), and the range of decisions you can make is excellent. Highly recommended for this game that you can easily load in an SNES emulator for PC.

Aerobiz Supersonic is a KOEI release that was developed for the SEGA Genesis and the Super Nintendo Entertainment Systems. Since its release in the early nineties, it has become a huge favorite on the SNES emulators for the PC. It is not a true sequel to Aerobiz, the airline simulation game, but displays many qualities of a sequel, and can probably be termed a "follow-up" as opposed to an add-on or a true, stand alone sequel.

Similar to the original Aerobiz, the user in Aerobiz Supersonic begins the game as the Chief Executive Officer of a small international airline company. There are three other budding companies similar to the users that he will be competing against for air travelers and traffic. The rival companies will either be handled by the computer's AI, or by other carbon-based gamers. The goal for all players: use savvy business skills, superior marketing, and technology to formulate a monopoly on the worldwide travel industry.

The play begins with some very simple choices. The user has to purchase slots at various airports around the world. The user has a limited amount of money and the better slots with the most air traffic are obviously more expensive than the less frequently traveled areas. The user has to choose if he wants to purchase one high quality slot, or build upon several poor or mediocre areas.

Regardless of the choice he makes, the user will be charged with the same tasks. He will be able to control what type of planes will fly in and out of his slots, some being more appropriate for some venues than others. He will also have to determine the price of airfares and what routes the planes will take. By successfully calculating and setting these variables, the user's business will ideally take off, and the goal of travel dominance will be reached.

The game play of Aerobiz Supersonic is really almost identical to the initial Aerobiz, but there are some scenarios to play, a choice of more planes, and more decisions to be made concerning the fledgling business. There are also four different time frames with which to run a business in, adding an interesting depth of play.

In total, Aerobiz Supersonic is an interesting play that is enough like and adds enough new twists to interest new fans of the game. It is recommended for download, and receives huge points based on its following in various formats. 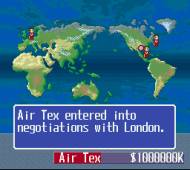