It's a great old game! I have been quite involved in the RPG's of late, and this has to be one of my favorites at the moment. When you start off in Wizard Warz, you first specify your options for your wizard. You can even chose which sex you want to be! Use the 'tab' key to flick through the spellbook and chose four spells. Hit 'E' and the game begins.

The screen is split up into three sections. On the left at the top is your spellbook, the left middle is a dazzling picture of you, and the left bottom is your health indicators etc. When you come up against an opponent the exact same information appears for them, but on the right. In the middle however is a circle containing the map. This is quite similar to the mapping for old games like Civilization, you have land and water, and trees etc. This is where you wander around looking for people to battle. When you do find someone to battle, the middle circle then changes and contains the arena in which the battle takes place. The arena isn't exactly small, so there is plenty of room to run around in. The whole idea behind the game is two opponents that fight using spells. You have to be strategic in what spells you use, and when you select your spells to start with it's good to have a strong combination. The good news is you can cash in points for health if you're running low, this is great, as I didn't seem to be that great at this game. ;)

PC speakers always make for great sound, this game being no exception, and the graphics aren't all that bad at all. This game was lucky to not be in classic cyan, magenta and white. :)

Definitely have a go at this game, its good fun, and a gem in the 80's RPG collection.

Wizard Warz is an "oldie but goodie" action-oriented RPG from Canvas that boasts much more entertainment value than its crusty 4-color CGA palette may suggest. You start the game as an apprentice wizard with relatively little power and four spells (of your own choice). Your ultimate goal is to become the chief wizard by beating the seven greatest magicians in the world. But before you are ready to meet them, you must first return six stolen treasures to the right cities, fight numerous monsters, and collect more and more powerful spells in the meantime.

The game is probably best described as a top-down action game with RPG elements, since you will be spending most of your time fighting various monsters that dot the landscape. But that is not entirely accurate, because your victory in battles depends more on using the right spells than reflexes: all monsters have different resistence levels to different spells, and finding out their weaknesses is part of the fun. This strategic element is similar to Mytho's modern classic Magic & Mayhem, except it is of course much simpler. All in all, Wizard Warz is a fun and vastly overlooked classic that will entertain any fan of action and RPG genres who prefers action over reams of statistics. Despite the simple gameplay, the variety of spell combinations and monsters gives the game very high play value - and will keep you glued to the screen, CGA and all. 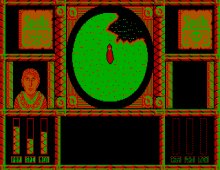 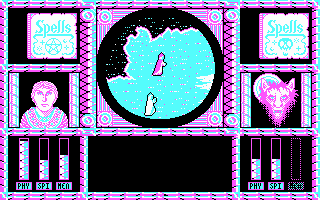