Another obscure Roguelike RPG, Sorcerer's Bane was released as shareware in 1991, although registering the game only gets you a set of programs to add items and monsters, edit character stats, and resurrect characters from the Hall of Fame list. The game itself remains the same, so I label it "freeware" here. The premise, as in countless other RPGs, is to retrieve X to kill the big foozle named Y. In this case, X is the "Staff of Power" that is being guarded by four dragons somewhere in the dungeon, and Y is an evil sorcerer named Lodi. The game is quite straightforward, with a basic set of commands that all Roguelike fans will be familiar with. There are some traps set to confuse you, but they seem random and not really puzzles to solve. Coming across new magical weapons and items (as well as cursed ones) is fun, but unfortunately they are not very different from each other except in names. The game lacks the "wow, this is cool" kind of feeling that Roguelike classics often inspire. So, overall, this has nothing you haven't seen before if you already play (and love) the likes of NetHack. Not recommended. 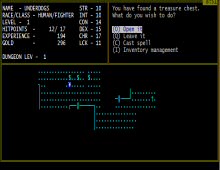 People who downloaded this game have also downloaded:
Dungeon and Dragons, Zelda Classic, Ultima IV: Quest of the Avatar, Tower of Darkness