Diver Down is a great fanmade freeware RPG - the first finished game using Verge, a new and promising RPG creation program. What I like most about the game is the much-better-than-average writing and setting, which is a far cry from the formulaic "kill the big foozle" premise. Fellow Verge coder Ratgash explains what is so much fun about this game very well in the long review on his homepage:

"The story begins when the main character, Drek, wakes up in what seems like an underground battlefield. He doesn't remember how he got there, who he is or what he was doing. Soon he realises that he must escape the place, and the quest for self discovery begins. The intro of the game is well done; it cuts straight to the action and there's no fear of a slow start.

Instead of introducing yet another "a hero must save the world" -plot typical to Japanese RPGs, this game offers something better: "Diver Down attempts to break new ground with a non-cliche plot that could support a movie. There are the expected common activities of rpgs in this fashion but care was taken to create a believable world with politics and detail." (Grenideer, Diver Down homepage.) In this area Diver Down totally delivers: the plot can be taken seriously and it's been carefully written to keep the player interested. All the characters in the game are well balanced. Even the most powerful enemies feel realistic, as they don't have god-like powers, which is another thing in this game that positively stands out from your typical RPG. The playable characters are not all good and honorable, and they each have their own personal motives to fight.

The gameplay is more traditional with all the usual elements like random battles, bosses, spells, special skills and items. Personally I felt that there were sometimes too many battles, and they got repetitive fairly quickly. I must've killed half of the populations of travellers and nomads in the world, but still they kept coming at me. There are usually only two different types of creatures to fight in one area. It's also very difficult to run from the battles at times, which caused some serious swearing. Boss-fights on the other hand are very intense and rewarding experiences.

Visually Diver Down is a mixed case. There are some really good-looking art cells and character portraits, but sometimes the quality drops. Some characters and creatures in the battles look very good, while others have simple designs. The tile graphics are average, never looking very impressive, but the game does have a very charming look. Some spell-effects are quite brilliant, and there are great animations in few scenes. Music fits to the game well, finishing the already excellent atmosphere that makes this game special. Some tunes in the battles lift your spirits, while the tone is usually melancholic and longing.

What I find somewhat strange in the game mechanics is that even though you are riding a horse, you still have to fight all kinds of bugs and animals on foot. It shouldn't be too difficult to avoid spiders and antlions etc. while riding. Even while riding the fastest horse, the creatures managed to catch me. In this version there are also some bugs and the game crashes quite a lot (at least on my computer), so it's wise to save often. A quicksave-button would have been nice. Remember to keep torches in your inventory (they're needed in caves and underground tunnels), I had to return to buy them a million times because I always forgot them!

Apart from some annoyances, Diver Down gives you a thrilling ride from the beginning to the end. There's enough challenge for experienced players to enjoy, lots of places to visit and people to meet. The dialog is enchanting at times, uncovering your past is fun and filled with surprises. The plot never gets too complex, but offers well enough depth to keep you interested for the 14+ hours the game lasts. Also the ending leaves room for your own imagination. Diver Down shows that most of the storylines in commercial RPGs could easily be so much better written. It is truly a remarkable achievement for such a small team, and hopefully this inspires others to work on their own computer RPGs." 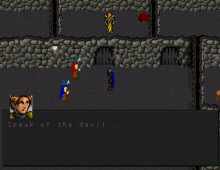 People who downloaded this game have also downloaded:
Druid: Daemons of the Mind, Betrayal At Krondor, Halls of The Dead: Faery Tale Adventure II, Albion