Dark Designs I and II are decent dungeon romp RPGs similar to early Wizardry and Ultima games: multi-character party, and first-person perspective that shifts to top-down view in combat. In and of themselves, both Dark Designs have nothing special-- typical fantasy plot, monsters, and a user interface that Ultima fans will be familiar with. Rather, the games' strongest appeal -- and the fact which assures their place in gaming history-- is the fact that they were both designed by now-famous John Carmack, back when he was employed by SoftDisk, months before he formed id Software with his brother Adrian and John Romero. The games were included on 2 issues of "Big Blue Disk"-- monthly shareware that came on 3.5" floppy disks by subscription.

Although they are by no means revolutionary, Dark Designs games exhibit the same care and polish that become the hallmark of later John Carmack games. They are fun to play, and even sport some nice features not commonly seen in early RPGs. For example, during character creation, you can assign each number you got to any stats, and secret areas abound. The games will also automatically save your game in progress once in a while-- a welcome feature that should be used more often in today's games.

In short, fans of classic commercial RPGs such as Ultima will probably find the games too simplistic and somewhat repetitive. As shareware titles, though, they are definitely some of the best ever made in that period, and one of the best Big Blue Disk games. And as some of the earliest games by John Carmack, they are definitely priceless to his fans and id Software historians :) 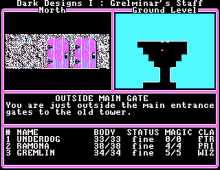