Th!nk Cross is a decent Tetris clone with a twist. Instead of moving falling blocks in an empty play area, your goal is to match blocks of various colors and shapes by moving them horizontally and vertically. The trick here is that the blocks obey laws of physics: they always fall downward once you move them off a ledge, so this means that a block that is trapped between two blocks cannot be moved until either of its neighbors is moved, and blocks can get "stuck" in a corner. This means that you must carefully plan the order of blocks to move, similar to Sokoban. Higher levels have more blocks to move, and the number requirements also increase, e.g. you must move three or four blocks together before they all disappear, instead of just two. Overall, a nice puzzle game that Tetris fans should enjoy, although the game's variation from the norm is very slight, and level design is not as ingenious as Sokoban. 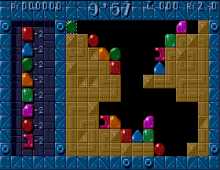