Rock 'n Roll is a cool action/puzzle game by Rainbow Arts that adds a lot of nice touches to the roll-the-ball-to-the-exit norm of action/puzzle games. The Amiga game just rocks and is definitely a classic. The PC conversion has some drawbacks such as no scrolling (just screen-flipping), not that cool music and the EGA graphics just can't keep up with the Amiga game. Still, all the great features of the Amiga version are intact, including the ability to buy items (by rolling the ball over the appropriate symbol), switches (whose effects vary from level to level), ventilators, magnets, explosions, and numerous other challenging obstacles to tear your hair over. Overall, Rock 'n Roll is a true classic in the Marble Madness vein that's best played with the mouse (which can be activated by pressing SHIFT-M during gameplay). 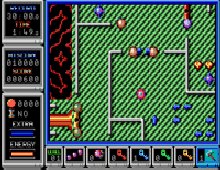 People who downloaded this game have also downloaded:
Rollin, One Step Beyond, Lemmings, LMarbles, Lost Vikings, The