Nyet 3: The Revenge of The Mutant Stones

One of the most original and best Tetris clones ever made, Nyet 3 makes the basic align-the-falling-blocks gameplay of Tetris much more fun with the addition of money, which you collect when beating a level, and many power-ups. MobyGames' more extensive description says it all: "At it's heart, Nyet 3 is a Tetris clone. It does however add a whole lot of variation to that venerable classic. The game is divided into 7 sets of 18 levels, and lets the player go through the levels in a set in any order. To beat a level the player usually has to make a given number of rows disappear, much like in any other Tetris clone. The difference is in the levels themselves. Some levels might have invisible blocks, others an indestructible snake that the player have to trap before there's a chance of making a row disappear.

For beating a level, the player receives money, the amount depending on how well they did during gameplay and the difficulty of the level. The money can be used to buy power-ups, of which there is a great variety. Some power-ups are permanent, such as the monitors previewing the next block. Other power-ups are bound to the Function Keys on the keyboard, and can be activated at any time during gameplay. These ranges from level type specific power-ups like the Fork, which traps a snake, to general power-ups like the Bomb, which destroys the top row of squares. To save the game the player need to buy a power-up as well." A must-have for all Tetris fans! 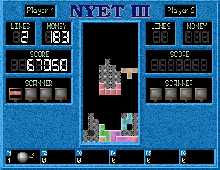 Nyet 3: The Revenge of The Mutant Stones screenshot

People who downloaded this game have also downloaded:
Lemmings 2: The Tribes, Alizarin Tetris (a.k.a. Atris), Humans, The, Humans 2, The, Lemmings