Modern Problems is a fun and very unique puzzle game that challenges you to figure out not only how to solve the puzzles, but also what their rules are. There are three kinds of puzzles in the game: in Worm Puzzles, your goal is to get the counter down to zero; in Gapwar Tiles, your goal is to remove all the gaps in the level; and finally in Quantum Boxes, your goal is to turn all 4 boxes red simultaneously. But within each puzzle type, there are numerous variants and minor rules that you have to figure out in the game itself. The Hint button provides clues, but half the fun in the game lies in figuring out the rules on your own.

Modern Problems offers a good balance between reflexes-based and logic-based puzzles. The Worm Puzzles, for example, are reflexes-based because you lose the game as soon as the worm crosses an empty tile (that you have not yet clicked on), and the worm travels on its own in real time. It's also logic-based because you have to consider which tile to click on next to maximize your score and guide the worm. Gapwar Tiles puzzles are some of the hardest in the game, although they are challenging and very satisfying once you solve them. I find Quantum Boxes puzzles more frustrating than the rest, mostly because they require precise timing and excellent reflexes much more than wit. Overall, though, the game is one of the most unique puzzlers you'll ever come across. With unique premise and fun gameplay, I highly recommend Modern Problems to every puzzle fan - especially if you consider yourself a puzzle maven. 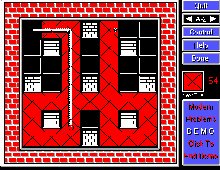