ML Otra is a simple but fun clone of Simon, a popular hand-held electronic memory game in the 1970s that challenges you to reproduce an ever-growing sequence of flashing lights and musical tones, using four colored buttons. Otra (from the spanish "otra vez", or "one more time") is a computerized memory game in the spirit of the game. The game is played in rounds, each faster than the last and requires a longer sequence of panels to complete. Points are accumulated for every correct panel, and bonus points are given for completing a sequence. At the end of four rounds, the player with the highest score wins.

As in Bob Lancaster's other games, ML Otra is simple, but fun especially when you compete against other human players. It's hardly original, but the excellent execution and the plethora of options make this a quality freeware old game. Recommended, especially for the kids in your house. 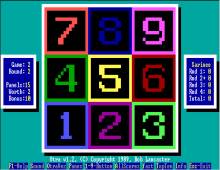