ML Loyd is a departure from previous Bob Lancaster games in that it's not a dice game. Instead, it's a fun computer version of sliding-tile puzzle game - you know, the kind that has you curse under your breath as you try to slide those numbered tiles one by one so they line up in the right order, from 1 to 15. The idea goes a bit further in ML Loyd: you will be scored based on how many moves you use to complete the puzzle. Each "game" consists of four rounds, and you can watch the computer or adjust game speed if you want. Overall, a pleasant text-only diversion, but not as fun or varied as other MicroLink games. 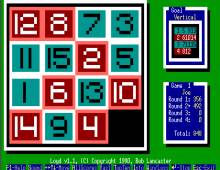