Mega Maze is a decent PC version of an underrated puzzle game of the same name which was published by Philips Media in 1995 for its short-lived CDi console. Your goal in the game is to guide a blue marble from its starting point to a flashing hole, while avoiding pits, enemy marbles, and various tricks and traps such as laser pulses, spark generators, and mine fields. If you have played any physical wooden labyrinth games, Mega Maze will be familiar to you. When you move the ball, everything else in the maze - the evil balls, etc. - roll in the same direction. This is basically the equivalent of tilting the game board in real life. So what is important is not so much finding a path to the exit, as moving the ball in the right order. You will need to use the purple balls to bridge gaps, open doors, or smash other balls to clear a path for your ball.

The problem is that the 3D act of tilting the board is represented in a flat 2D overhead perspective. So when you tilt, there is no feedback on the screen except for the movement of the balls. An isometric 3D perspective like that used in Marble Madness would have solved this problem, and made the game much more fun.

As it stands, though, you can still be entertained by Mega Maze if you enjoy similar brainteasers. There are 75 levels in the game, each made up of up to 3 individual mazes, making for a total of 164 mazes. Finishing a level gives you a code to play the next, more difficult, maze. Fortunately, most levels are short and sweet, requiring you merely to figure out a clever solution and moving the ball very fast.

Most puzzle fans will likely find Mega Maze too tedious to be fun. It is far from the addictiveness of, say, Lemmings - but if you like wooden labyrinths or maze games in general, it's worth a look. 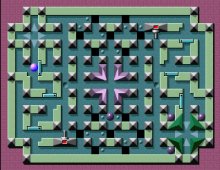 People who downloaded this game have also downloaded:
Lemmings, Lemmings 2: The Tribes, Lemmings Chronicles, The (a.k.a. All New World of Lemmings), Pushover, Humans 2, The