Helious is a fun and unique arcade-style puzzler that is very hard to describe. Essentially you must maneuver a balloon through 18 different worlds (9 in Helious 1, the shareware version, and the other 9 in Helious 2, the registered portion - both are included in the download here). In order to win the game, you must match up the icons by each colored ball with the icons found by completing each level.

The trick in Helious that makes the game challenging is that you must release a little air in the direction you want to move. Since air in a balloon is limited, you must conserve air as much as you can, and look out for air pump on each level that you an use to regain lost air. The balloon gets smaller and smaller as you lose air, until eventually it will pop, forcing you to restart the level. The levels are all filled with sharp, spiky objects and monsters, as well as other obstacles including locked doorways. Each level has a unique layout and graphics, which get weirder the more you play. The game basically requires you to squeeze through tight spots, search for air pumps and refills, capture keys to unlock doors, grab firepower, and even rain photon death upon vicious sharp objects.

Overall, Helious is a fun game that requires patience and careful timing, as well sharp shooting skills. I was having fun for a while until the game's very colorful and weird graphics became too frustrating for me, since I would have to spend a lot of time separating obstacles and monsters from the background graphics. If you can tolerate some eye strain, though, Helious is an interesting game that is well worth a look, especially if you enjoy other "new age" style games such as Vaxine.

Note: formerly released as shareware, Helious is now freeware thanks to its designer, Sean Puckett. 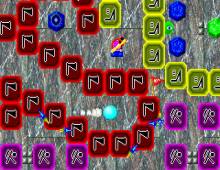