Colorful Notes is a clever swap-the-tile puzzle game from Japan. Your goal: join same-colored tiles together by swapping them. There is a catch, though: some tiles cannot be moved, and some others can only be moved a certain number of times (the number of moves allowed is written on the tile). On higher levels, you must solve the puzzle within a given number of moves also. Pleasant graphics, intuitive interface (basically left and right mouse buttons rotate the square left and right), and even a rocking soundtrack round off this nice game. The game has 100 levels, and if you manage to solve them all, you can create your own by using the built-in level designer. Highly recommended for fans of difficult brainteasers, although be ready to get frustrated at around level 20 or so ;) 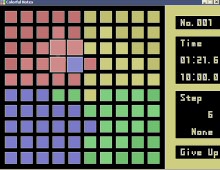