Turn It is a simple solitaire Mahjongg game that is set up a bit differently from normal: instead of a mountain of tiles, you just see a whole screenful of tiles at the beginning of the game, all lying on the same level. Like typical Mahjongg games, the goal is to remove as many tiles from the board as possible. You do this by removing one pair of matched tiles at a time, but only when there is a straight path to it, i.e. no other tile that gets in the way. This requires good strategic planning, because you have to think about which pairs to move first so as not to obstruct paths to subsequent pairs.

While the game pales beside Activision's acclaimed Shanghai series, Turn It is still quite fun. You can play in either solitaire or two-player mode, in which you compete with another player for higher score. There are 50 levels in the game, and there is time limit per turn that will force you to think and act fast. The combination of reflexes and strategy makes the game fun, and challenging especially at higher levels. The game is in German, but there's nothing you need to know if you already know how to play solitaire Mahjongg. Worth a look. 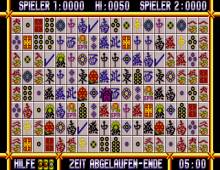