Das Stundenglas was the first game by little German Bavarian-based company Weltenschmiede. It's an illustrated text adventure, all in German, in the style of the Magnetic Scrolls games, combining the story with many graphic stills.

At the start of the game, you find yourself in a little town in the year 2012. Human civilization as we know it is no more. The world has seen an ecological disaster with only few people surviving; the world populated with robbers and plunderers. In a little toy store, you will find access to a portal into another world. A huge fantasy adventure evolves about the mysteries of time and "Das Stundenglas"...

The game, in short, is very well-written, filled with many puzzles, riddles and an interesting storyline that should provide many hours of fun gameplay for people interested in the genre. It has a few weak spots in technical terms. The parser is usable but certainly not state-of-the-art compared to similar English-speaking games. Also the graphics could be of a better quality. Nevertheless, it was a good game for a budding company, and Weltenschmiede improved with their following adventures, Die Kathedrale, Hexuma and more recently Die Höhlenwelt-Saga.

The game was released as freeware in 1998, novel and copy-protection included with the archive. 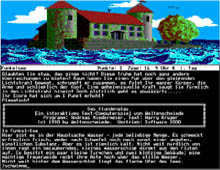