Der Schatz im Silbersee is a decent graphic adventure by Software 2000 and Swiss developer Linel based on the popular Karl May characters. Certainly no milestone in adventure gaming but most of the things you could expect from a "classic-style" adventure are there. More Karl May adventures were planned, but this one was the first and last to be released. The puzzles are a bit on the easy side and the game overall is shorter than average, but it's quite fun while it lasts. Try a slow-down util, if you get runtime errors when you try to start the game. Note: The in-game text is in German. 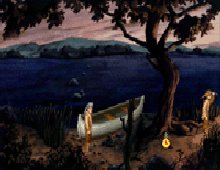