Future Dimension is a very cool arcade quality shoot'em up by Crew242 and Lifetimes. The game features great fast graphics and nice in-game MOD music. There are 3D levels as well as the classic vertical and horizontal scrolling ones, making gameplay very varied and interesting throughout. Recommended if you're fond of shoot'em ups. The in-game movies are missing in this CD-rip. Note: The in-game texts are in German, but that shouldn't be much of a problem for this type of game. 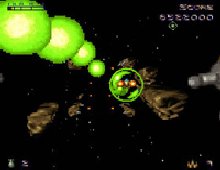