Decent conversion of First Step/Software 2000's Amiga game. Death or Glory is a round-based strategy game with fantasy role-playing elements. Some of the in-game art (intro, character faces) look fairly nice - very well drawn, while the graphics overall could be described decent at best - comparable to the early Final Fantasy games. In general, it's a neat, entertaining game for a while, especially if you like the genre. But nothing that changed the history of computer gaming by much. ;) Note: The in-game text is in German... as usual with most early Software 2000 games, the English version was never made. 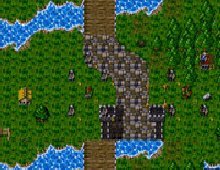