Not to be confused with another game with the same name from reLINE, Black Gold is a great simulation of the oil industry from Starbyte. The game is similar to reLINE title, but focuses more on realism and solid economics model than accessibility. Your goal is to become an oil magnate and make more money than competitors (up to three, any of whom can be computer-controlled). The representation is somewhat boring: similar to early Impressions games, you will be looking at one spreadsheet-style screen after another. Most of your business decisions will be done by changing various parameters. The computer AI is more ruthless in this game than in reLINE's game, and the economic model is more sound, although more random events would be nice. Overall, if you enjoy reLINE's Black Gold but feel that the game is too easy or simplistic, you will definitely enjoy this old game from Starbyte. Too bad the English version was never released, so only gamers who understand German will be able to play. 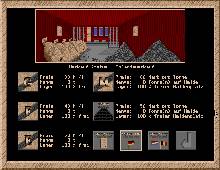