Big Sea is a mediocre management simulation about production, trading and conquest set in a fantasy world with dragons and wizards - quite an unusual scenario for this kind of game. Not much more to say about the game, though-- it plays like a cross between SSI's Stronghold and Fantasy Empires, but is not nearly as addictive as either game. Many static statistics screens make the game quite boring rather quickly, so unless you like number-crunching, steer clear of this one.

Note: Game and manual are both in German. 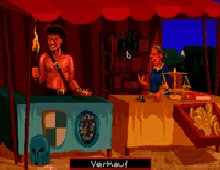