Polarware's short-lived Spy's Adventure series of educational games are pioneers of an original concept that would be popularized by Carmen Sandiego. In one of the more interesting anecdotes of gaming history, Broderbund released the first Carmen Sandiego game a scant two months before this title (Mark Peclszcerski, designed and founder of Polarware, certainly didn't think it was mere coincidence).

Whether or not Broderbund "borrowed" Polarware's concept for their blockbuster series, there's no mistaking the game's similarities with Carmen Sandiego. You are cast as a spy who is pursuing the evil Dr. X around the continent. As you arrived in a new country, you can buy or obtain clues to the location of the villian, and browse the dossier about that country. If you paid attention to the dossiers, the clues would direct you to the appropriate destinations and ultimately Dr. X's hideout. Despite inferior graphics, the game has one advantage over Carmen Sandiego: there are 2 excellent multiplayer modes in which up to 6 players can co-operate together, or compete against each other in their pursuit of Dr. X. Add to that the well-written dossiers, interesting clues, and some strategic elements (for example, you have limited cash with which to buy clues), and Spy's Adventure games are excellent edutainment titles that are highly recommended for kids and adults alike. 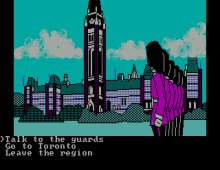