Also released as Sesame Street ABC (but of course with Sesame Street characters instead) for the NES, Letter-Go-Round is a decent educational title aimed at kids aged 4-8. The game includes six spelling-related mini-games: upper case matching, lower case matching, mixed case matching, one little word, what's missing?, and spell the secret word. Each of the mini-game is set in a carnival, and many familiar characters from Muppets. For example, in "upper case matching," the game gives you a partially formed word, let's say "H-I-?". You then pick the right letter to complete the word, e.g. "T" to spell "H-I-T." After you spell a word correctly, a Muppets character comes up to replace the letter you pick with a new one on the ferris wheel. Other mini-games follow in this vein, and the library of words is quite large. Too bad the game was released too early to have more colorful graphics, though: the 4-color CGA palette for a kid's game doesn't stand the test of time too well :) 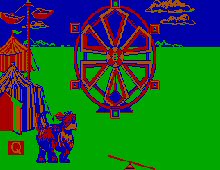 People who downloaded this game have also downloaded:
Reader Rabbit, Reader Rabbit's Ready for Letters, Adventures in Math, Where in The World is Carmen Sandiego? Deluxe Edition, Barney Bear Goes to Farm