Kindercomp is yet another achievement in Spinnaker's successful line of edutainment titles. In this fun game designed for kids aged 3 to 8, toddlers will have fun with 6 mini-games that teach a wide range of subjects. Kids can create colorful pictures, or enjoy bright colors and neat sounds as they press different keys or scribble on the screen. They can also write their name, and make the alphabets come to life with colorful animation. When they successfully match shapes or complete number sequences, kids are rewarded with attractive pictures and sounds - as attractive as 1983-era, 4-color CGA palette can present, anyway ;)

Unlike most other early edutainment titles - most notably releases from IBM - Kindercomp remains highly playable decades after its original release, despite primitive graphics and sounds. Definitely a highly underrated, and very rare, early pioneer in the edutainment field. 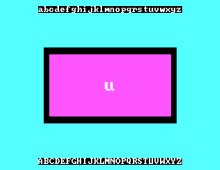